The pharmaceutical industry is dependent on research and development as much now as ever. Here we look at some of the of key areas that are currently catching the attention of our industry, and break down the relevance of each of the top eight.

“Multiple new development approaches have been emerging in recent years based on new scientific knowledge."

Introducing a new drug into practice often follows many years of intensive research and almost certainly huge expenses. The traditional method of developing a new drug relies on the testing of a large number of compounds in various simplified models, and the gradual selection of suitable candidates for further development and for clinical trials. However, many substances get eliminated even during clinical trials either for insufficient or undesirable effects. New approaches have therefore been emerging in recent years based on new scientific knowledge in the fields of metabolism, molecular biology, genomics, but also artificial intelligence, 3D printing and the development of new materials. All of which aim to reduce the degree of randomness when searching for new effective drugs.

Alchemists of the 16th century and authors of science fiction novels in the 19th century contemplated the concept of artificially created miniature human beings in test tubes (homunculus) which could be used for various experiments. Today, this concept is becoming a reality in the form of artificially modelled organs from real cells, created in predefined organized structures mimicking organs (liver, kidney, pancreas, etc.) and responding to drug molecules identically to real organs. These studies allow much more accurate modelling of drug efficacy, toxicity and other drug properties at essentially zero risk.

The creation of said organs is credited, in no small part, to the use of modern 3D printing technology, which utilises a special biocompatible medium (known as bioink) that allows cells, including human, to exist and multiply. This material can then be used to “print” body parts (currently most often nose and ears) or even more complex organ structures such as liver. These body parts can then be used in cosmetic surgery, or more importantly as preparation (hopefully in the future also for the production) of artificial organs suitable for transplantation.

The same method may also be used to prepare tumour replicas that enable researches to conduct cancerostatic drug studies in a way that would not be possible in patients. Bioinks could be combined for example with a patient’s cancer cells to study ex vivo what type of therapy would work most efficiently.

The growing resistance of bacteria to antibiotics is becoming a critical problem of modern medicine. It is estimated that resistant strains are responsible for up to 700,000 deaths per year. The main cause of this problem is the irresponsible and unnecessary use of antibiotics to treat banal diseases. For many years, research into new antibiotics was considered unattractive; however, the situation has now changed.

The discovery of Teixobactin and its analogues is an example of a significant recent achievement. This new group of macrocyclic depsipeptides appears to be able to overcome the development of microbial resistance; there is also a synthetic product, currently undergoing preclinical and clinical trials with very promising results so far. It has been demonstrated that Teixobactin is most effective against Mycobacterium tuberculosis and Staphylococus aureus. However, it will undoubtedly become necessary in the future to continue the search for new antibiotics against other resistant strains.

By changing the dosage or changing the formulation, the use of the same active ingredient can be extended to include other indication areas. Fixed combinations of several active ingredients in a single dosage form are also popular, improving efficacy by synergistic action and at the same time increasing patient comfort.

"Some of the areas may have a disruptive effect and have the potential to rapidly change the character of the pharmaceutical industry."

The ubiquity of mobile phones today has allowed researchers to employ them to monitor patients during clinical trials and study monitoring. Using relatively simple applications, it is possible to continuously monitor, for example, blood glucose, ECG and other clinical data. In case the predefined values are exceeded, the application can inform the doctor and continuously store the recorded data in the clinical project database. Large international companies are beginning to use these methods on an ever-increasing scale and in return expect cost reductions and greater patient comfort.

DNA contains protein synthesis information while RNA carries the instructions encoded within DNA leading to protein synthesis in ribosomes. The majority of drugs attempts to influence the disease-causing proteins; however, current thinking shows that it could be more beneficial to focus on the preceding step in the cascade of causes and affect RNA before the harmful proteins are even synthesized. This is the goal of gene therapy, which offers a very effective but at the moment extremely costly treatment for the most severe cases of serious diseases.

These therapies are usually administered only once (since they are truly curative and causal), which in turn means the pharmaceutical company receives only one payment per patient. The price of an application can therefore amount to millions of dollars. It is then necessary to admit that ideal patients for the pharmaceutical industry are those that require expensive drugs for their entire lives, leading to predictable incomes for the pharmaceutical company. Current reimbursement policies are not designed to objectively reimburse single and final drug administrations, as such there is a complicated search for the optimal approach between healthcare payers and manufacturers.

An example is the discussion concerning a new gene therapy for a very serious, and until recently, incurable disease called spinal muscular atrophy. This gene therapy (called Zolgensma) causes the neurons of the patient to start producing the appropriate gene that will return mobility to the patients (infants). The cost of the therapy is still a matter of debate but is believed to be in millions of dollars. Serious ethical and pharmacoeconomic problems therefore emerge because there is an effective drug, but the cost is extremely prohibitive.

An interesting area that is currently trending is the search for new indications for old drugs. Each drug has, in addition to its officially approved and registered therapeutic effect, a number of other effects that are referred to as side or undesired effects. Appropriate repositioning, reformulation or dosage change may make some of these side effects more interesting than the original effect. The search for these new effects can be conducted either empirically (e.g. by analysing the side effects) or directly by systematic analysis of the published clinical trial data, analysis of drug binding to receptors, or use of theoretical and computational chemistry methods. Already published preclinical and clinical data may be used to make the research significantly shorter and less expensive.

Dozens of drugs created by repositioning have already entered the market and the search for new ones continues intensively.

Interesting recent cases of repositioning include, for example, disulfiram, a drug used in the treatment of alcohol dependence. This substance is now being used in clinical trials related to treatment of AIDS and some types of tumours. Research studies in the field of psychiatry include the antidepressant effects of the old anaesthetic ketamine, respectively its optical isomer esketamine, and also the known hallucinogen psilocybin. The expected advantage of these drugs would primarily be a very rapid onset of action, as opposed to conventional antidepressants, which require many weeks for the effect to come to prominence.

The cannabinoid market is expected to continue to grow. Products containing marijuana (THC) were stigmatized for a long time but as can be seen, for example in the USA, they have proven to be useful when tackling opioid and analgesic addictions. The legal use of cannabinoids will be of increasing important in the treatment of chronic pain and epilepsy, etc. For some time now, a gradual relaxation of some very restrictive legislation policies has been taking place all over the world which is doubtlessly going to drive even more research in this area.

“The legal use of cannabinoids will be of increasing important.”

An ever-increasing trend is in the popularity of various preparations and procedures that promise to clean the body of harmful influences, increase sexual potency or prolong youth, plus medications including the ingestion of various plant and artificial compositions. “Wellness” has become one of life goals not unlike achieving nirvana and the state of bliss.

This whole area is directly connected to the growing market of over-the-counter products, and in particular dietary supplements that do not generally have objective evidence of effectiveness but are in high demand. This trend has also attracted the attention of large pharmaceutical companies, most recently for example Glaxo and Pfizer with their joint investment in over-the-counter drugs and dietary supplements of 12 billion USD.

These are only a few examples of the changes and new trends that have increasingly been influencing medicine and the pharmaceutical industry in recent months.

Such developments present new challenges, but also opportunities for pharmaceutical companies. Some of the areas that have been covered above may have a disruptive effect and have the potential to rapidly change the character of the pharmaceutical industry. Large pharmaceutical companies often delegate some activities to specialized institutions. In the past, these included, for example, syntheses, analyses, clinical trials, documentation processing, etc. In the near future, these may include applications of artificial intelligence, remote patient monitoring, bio-printing, preparation of artificial cell structures and testing of new drugs in these systems. Only well-prepared and highly flexible companies will be able to survive in this rapidly changing global environment.

Please be sure to follow us on LinkedIn for this and other industry insights and news! 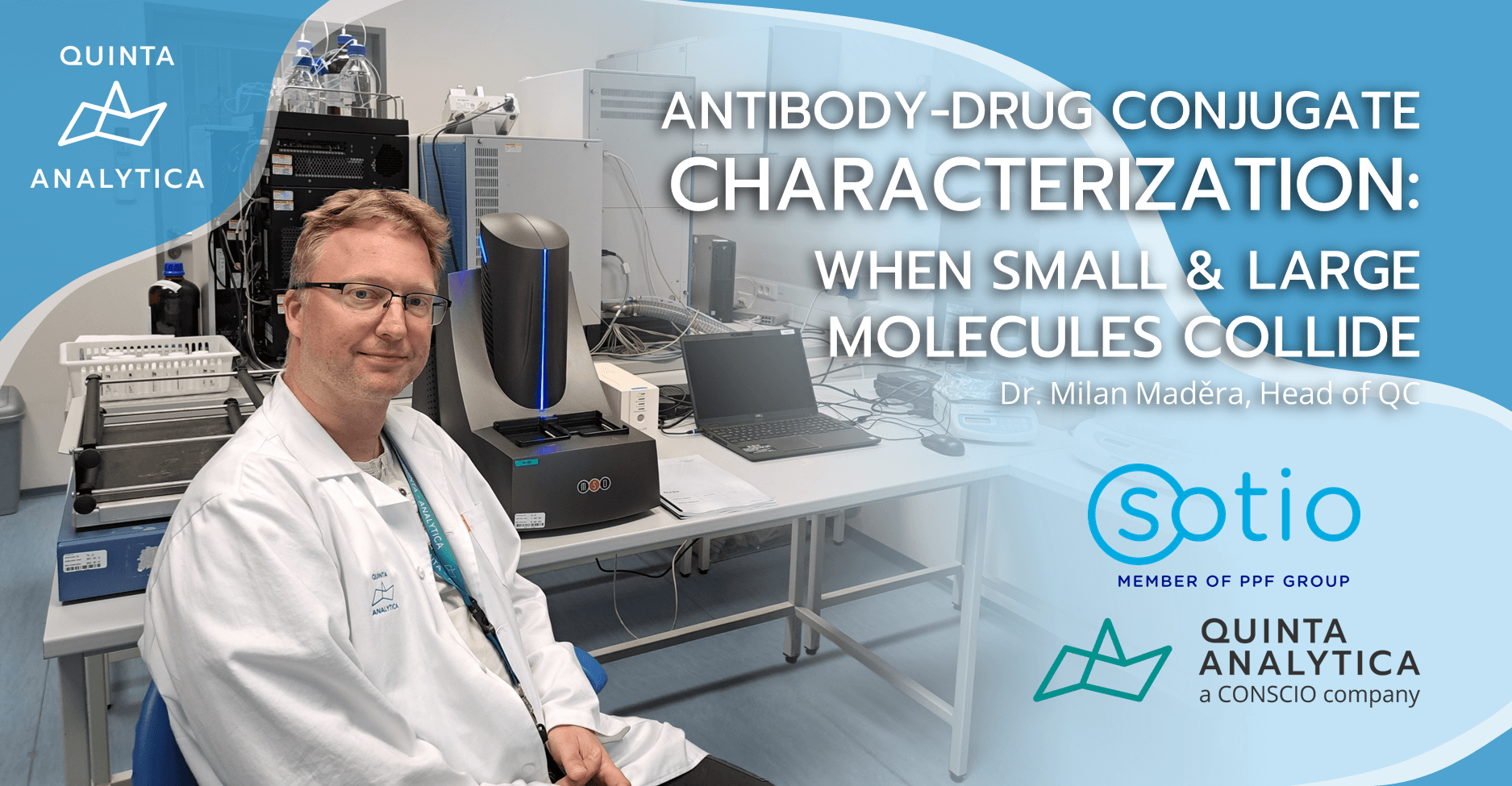 Quinta-Analytica is among the few CROs offering GCP/GLP/GMP services for biologics. We and our valued biotech client SOTIO wish to share our experience with antibody-drug conjugates, the toughest biologics. 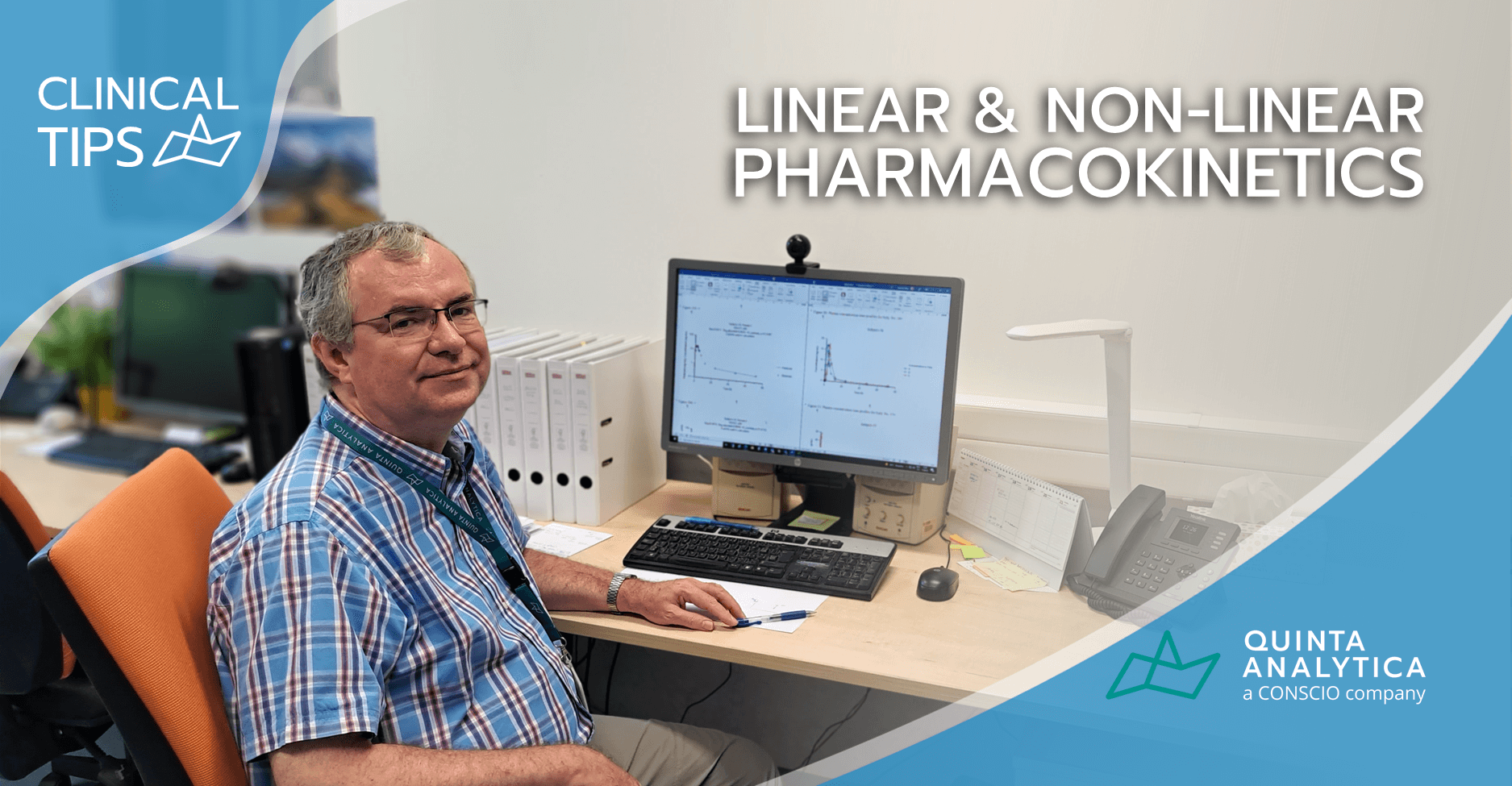 QUINTA is well-known for its state-of-the-art equipment and facilities used to perform clinical trials and bioanalytical services under GCP/GLP; but today our experts wish to talk about pharmacokinetics and statistical evaluations, an important part of their day to day work which doesn't always get the attention it deserves. Click and keep reading! 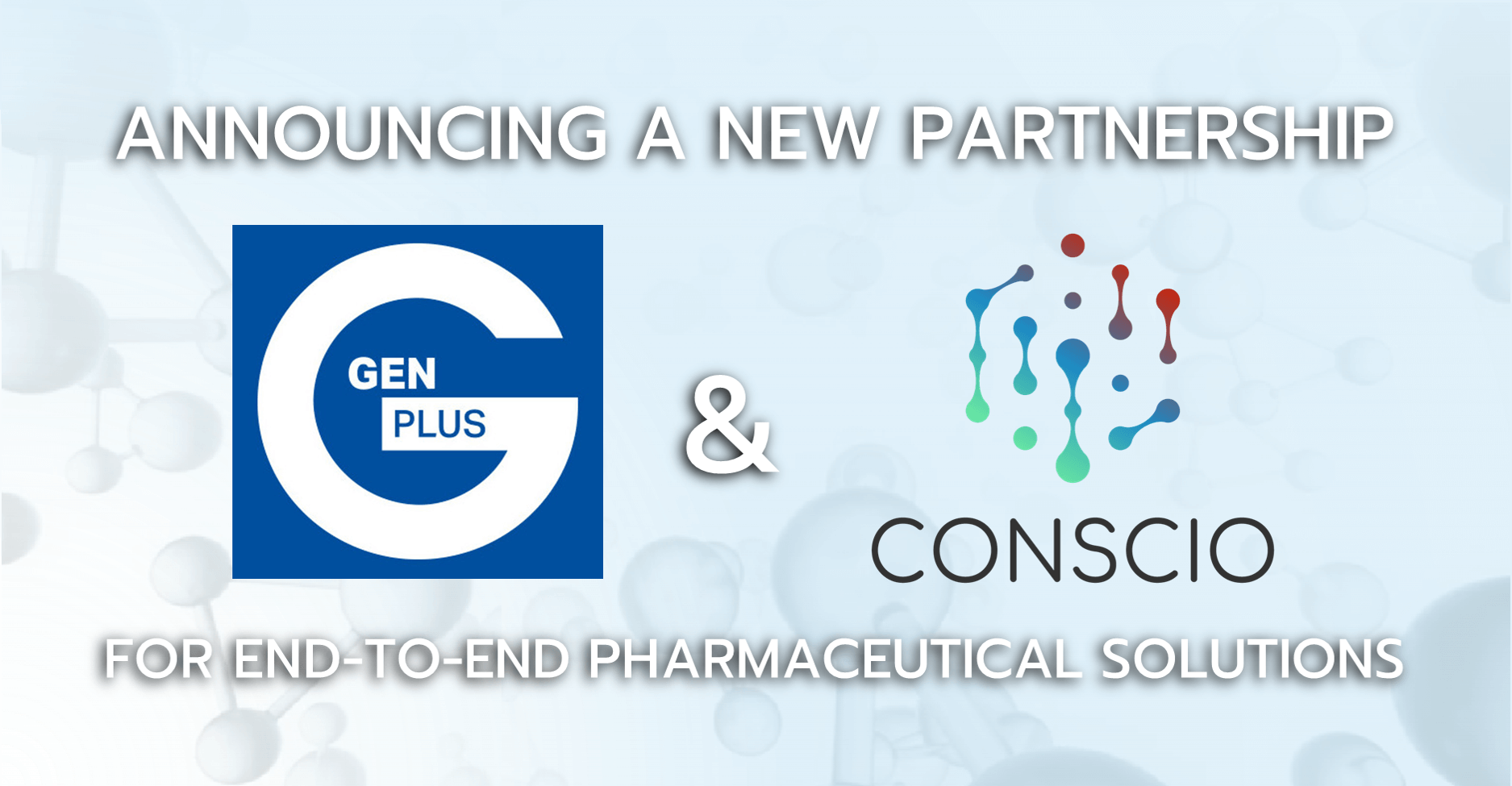 Today we proudly announce that Gen-Plus GmbH & Co. KG, a Munich-based pharma R&D and manufacturing expert, has become a new member of the Conscio Group.